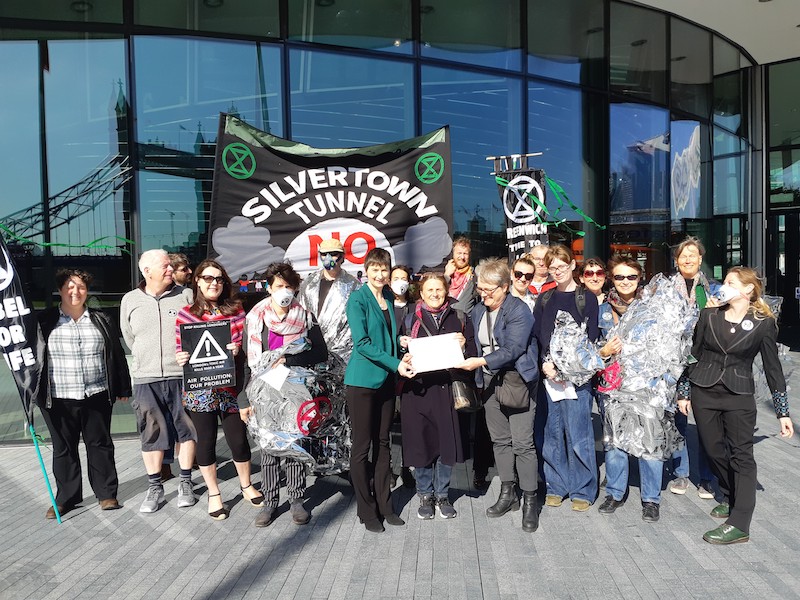 Greenwich and Bexley Green Party has signed an open letter to the Mayor of London and the Deputy Mayor of London for Transport calling for plans to build a new road tunnel between Newham and Greenwich to be scrapped.

We oppose increases in air pollution

Greenwich and Bexley Green Party (GBGP) oppose the new Silvertown Tunnel on the basis that the scientific evidence which shows that air pollution is a contributor to health problems is unassailable.

Combined with the abundant empirical data which show that new roads and tunnels serve only to draw increased levels of polluting transport into the areas in which they are introduced, there is no case for sponsoring public works which increase risks to public health.

Public recognition of the problem of air pollution has been growing significantly in recent years thanks to the relentless efforts of people such as our 2020 candidate for Lewisham and Greenwich for the London Assembly, Rosamund Adoo Kissi-Debrah, who has campaigned tirelessly with the Ella Roberta Foundation.

Did you know that air quality is searched now and recorded by some estate agents when people want to move houses? For the Green Party, access to clean air is a matter of social justice. It is the less affluent who must live in cheaper housing next to major arterial roads who suffer the most and have the least power to change their situation. There is an increasing body of research linking poverty, air pollution and low birth weights.

Greenwich and Bexley Green Party are committed to policies which improve local air quality through cuts in pollution and achieve the global imperative to reduce the use of fossil fuels.

What next for the campaign?

The last remaining council to back Silvertown Tunnel is our very own Royal Borough of Greenwich Council. While some cabinet members have publicly been expressing doubts about the project, in private they are waving it through.

Greenwich and Bexley Green Party will continue to apply pressure upon the council to get the plan scrapped. But we need your help. Please take action by gaining signatures for our petition.

Greenwich and Bexley Green Party will hand in a petition to Greenwich Council to revoke its support of Silvertown Tunnel at the next full council meeting on Wednesday June 26th 2019.

Please support this urgent action by:

We applaud your introduction of the Ultra Low Emission Zone and your action on concerns about pollution and climate change.

However, many Greenwich residents have been unhappy with the planned Silvertown Tunnel for years, and with the new awareness of the Climate Emergency this unhappiness and indeed anger about the lack of response to our concerns is spreading quickly.

We feel that this scheme should be delayed and re-evaluated in the light of the current climate emergency.

Our arguments are these:

In conclusion we feel that the building the new Silvertown Tunnel is a very expensive mistake at this time. We now know that motor traffic is detrimental to the health of the population born and unborn, and that to ensure public health and climate stability we need to sharply reduce car use across London - so building a tunnel that can never be fully used because it's a potential pollution bomb is a massive waste of public money. We are in a climate emergency, and so we would suggest that instead of spending £1bn of Londoners' money on a new road tunnel at Silvertown, we should invest in priorities such as a smart road pricing scheme across London, new safe bike infrastructure, and electrifying the bus fleet.

Greenwich and Bexley Green Party, [Other signatories to the 'Stop the Silvertown Tunnel Coalition']